If the resistance welding force is increased will the mechanical properties and the nugget diameter of the weld change?

If the resistance welding force is increased will the mechanical properties and the nugget diameter of the weld change?

Pressure is one of the major components of the welding process Pressure, Current & Time (PCT). In most weld schedules pressure is called out as a force value. Pressure is this same value as force but applied to the surface area of the electrode contact face.

See the article - How are force and pressure related?

The relationship between pressure and the heat generated during resistance welding is well established. It is represented by the figure below. 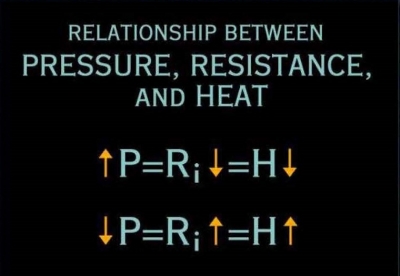 The following scenario considers force changes only and does not suggest it is the only option available or the best option:

If one were making welds that were running very hot and the nugget was at the high end of the acceptable range. In addition the electrode might be showing signs of sticking to the workpiece. One could consider an increase in force. This would decrease the heat at the electrode face, and possibly reduce the nugget diameter. The goal would be to keep the nugget within the desirable specification range but take some heat out of the process.

Conversely If the nugget size was running on the lower end of the specification - reducing force reverses this process and would generate more heat and possibly increase the nugget size. The electrode face will potentially running hotter.

Another function of the force component is FORGING action during the hold/cooling portion of the weld cycle. The forging action strengthens the weld just as a blacksmith's hammer does in a forge shop. Increasing the force adds to this forging and can increase the nugget mechanical strength. The opposite could be true for decreased force.

All of these changes depend upon how much you change the force and where the operating settings are relative to the proper weld schedule for the materials being welded. Changing force may be a good option but other options are available to improve (PCT) pressure, current and time that could be considered to improve a weld schedule.

What is the force component of a weld schedule?

How are force and pressure related?

What happens if I change the force?