Why is it called mid frequency?

An inquiry came in asking why is MID FREQUENCY WELDING called MID FREQUENCY? That is a very logical question which goes back to the frequency of the power being generated in MID FREQUENCY resistance welding.  In much of the world this is 1000 Hz.

In the world electricity frequency is divided into ranges of:

LINE FREQUENCY: This is the normal power grid in the world which run as 50-60 Hz

The resistance welding inverters produce a 1000 Hz Dc output which is in the medium range which is why it is called a Mid or Medium Frequency welding.

If one looks beyond the electrical world we find that :
Speech and Sound have a similar break down and description of frequencies.

Radio Waves have a similar but different range:
Low frequency is 30kHz to 300 kHz

Where can I obtain manuals for a resistance welder?

Manuals are supplied with a new resistance welder for the major components of the machine. If this is an old in house machine or a used machine manuals may not be present. In that case a thorough search of the machine to find the machine builder label with model number and serial number (if present) is in order for all of the components. 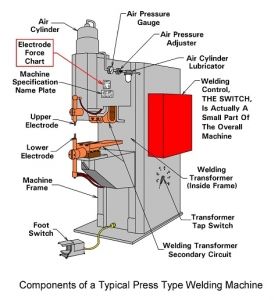 A weld gun would have the same information on it's components.

Why do I have inconsistent results nut welding on galvanized steel?

You stated that all runs well but once in a while you have a bad push out on your nut welding. Apparently your weld schedule works and produces good welds but some variable is causing discrepancies occasionally. Let’s address the important factors in projection welding.

It is important that you have good equipment alignment so that you apply force to all projections on the nut at the same time and with equal force. Next the force system of your welder or gun must be able to move quickly as the projections collapse in order that full force is maintained. This is called fast follow up. A large press welder not properly equipped or a sticking cylinder or a slow servo could cause a problem. 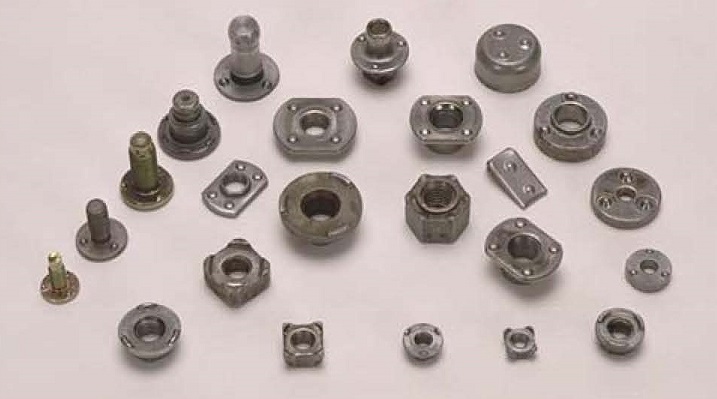 If there an insulated locator pin.  Is the insulation worn? Are there signs of arcing? The current could be shunting through the pin and bypassing the projections. Additionally it may be damaging the threads.

Is there a buildup of flash/residue that is interfering with alignment or causing a current/shunting path?

The fact that you have a working process most of the time indicates a variable is present  that needs to be controlled. Other than a tweak the schedule is probably pretty close.

Additional reference schedules for nut and projection welding can be found in:

How do you make an automated multi-spot welding machine?

The fabrication of this equipment involves the integration of many systems including a frame, index table, tooling, automation; weld control, transformer and cooling.

This is the world of machine and system integrators and beyond the scope of this website.