Why is there intermittent expulsion when repairing an auto radiator with a resistance welding?

Why is there intermittent expulsion when repairing an auto radiator with a resistance welding?

It is very difficult to control the weld environment when welding upon a surface which has already been welded.
See other articles in this blog:

IS THERE A MINIMUM SPACING BETWEEN SPOT WELDS

Each time that the welder closes the welding conditions needed are unknown. Is the electrode closing on a previous weld fully, half on, next to one or on virgin metal. This position variable changes the shunting current and thus the welding conditions. Maybe the electrode landed between two welds but the metal must be forced together which used up most of the available force. No force remains to contain the weld nugget during the weld cycle. Now we have shunting current problems plus lack of force. If the force is low the heat will be higher leading to a hot spot without containing force. This is a set up for expulsion.
Performing repair work can lead to a substantial amount of excitement and fireworks. It is not a controlled environment. 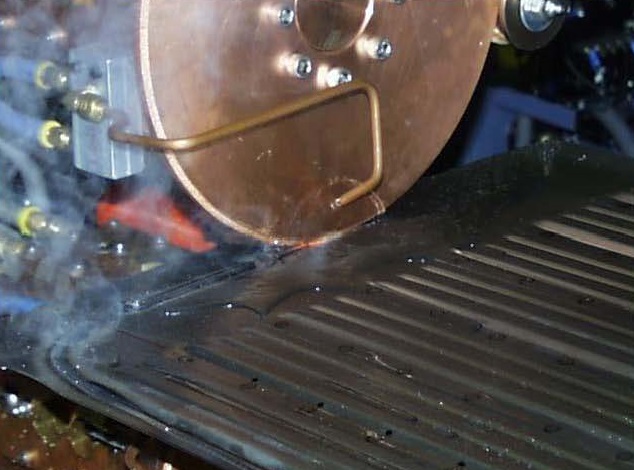 A resistance braze might be a better option in some cases. It requires heat but not as much. Just get the braze material hot and melted. There may be a braze paste that will do the job and fill in the voids? The resistance welder can generate the heat in the same manner just heat up slowly. Heat may be for several seconds not cycles.

See another article in this blog:

WHAT IS RESISTANCE BRAZING?