What are the typical components of an AC weld control?

A standard AC weld control is made up of a modest number of components each with a specific purpose. The major components are:
Disconnect
Welding Contactor
Weld Control Logic
Valve Power Supply 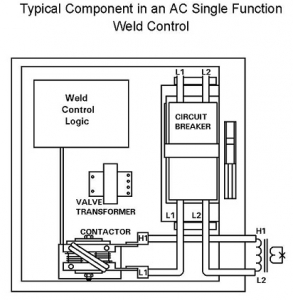 The Disconnect is a safety in case of an electrical failure.
The contactor is an SCR control device which controls the amount of power and time of power conduction.
The Weld control logic is a microprocessor unit which receives all external inputs and initiation signals and activates all sequences including the force and power.
The Valve Power Supply provides the low voltage and signal to the cylinder or servo unit for the force component of the weld system.

What is an inverter?

An inverter weld control is one in which the AC positive and negative half cycles have been inverted. The result is all half cycles are positive and their frequency is increased. They generally operate at 400 – 4000 cycles per second.

Because the current never crosses zero there is no cooling during this current flow. Heating is much faster and there is more power in less time and less current input. It is a DC weld therefor magnetic affects are not as much of a problem. This means that throat depths and magnetic materials in the throat are not much of a problem.

What is the function of a circuit breaker in a weld control?

As in all electrical devices the circuit breaker is part of the safety system. It insures that if there is a short downstream of the breaker or a sudden spike in amperage, it will trip and prevent further damage to any equipment or wiring downstream. Sometimes facilities use fusible disconnects to perform this same function.

What types of secondary current can weld controls provide?

Weld controllers can be designed to provide several types of secondary currents. Until recently AC alternating current controllers were the dominant product. With the advent of robots and the need for smaller/lighter transformers mid frequency welding has become very popular. It has also replaced many applications for DC direct current welding. Capacitive discharge CD welding continues to have some applications.

What is upslope in resistance welding?

Upslope is a term to describe the beginning a weld cycle when the current is gradually increased from some lower value to a higher value over a period of time usually 3-10 cycles in standard AC welding. At the end of the upslope period then normally the full desired current is applied for the desired length of time.