When seam welding a lap seam or a mash seam weld just as in a spot weld generally some amount of material is displaced along the edge of the wheel as it travels along the material. The amount and shape of this material or weld flash could be of sufficient amount to be considered a burr. The material we are talking about is the same material formed around the nose of a spot weld electrode as it welds. All resistance welds seam or spot can leave some deformed material around the periphery of the weld zone. This upset or forging contributes to the strength of the weld. Generally this is not enough to be called a burr but in some cases the indentation could be cosmetically offensive if the surface were to be subsequently painted or were in a very visible location like the hood of a car. Product designers avoid welds in these locations.

Where seam welds generate visible indentations or slight raised areas which are not desired, they can be treated as cosmetic welds. The weld schedule and electrodes, in this case weld wheels are selected to reduce the amount of heating and expulsion on the side of the part where the marking or burr condition is not wanted. The wheel weld face might be increased. The force may be increased. This reduces contact resistance and surface heating. Adjustments to current and weld speed can be made. All of these would be made with the intent of reducing the surface heat and amount of material being expelled or pushed out during the welding process. 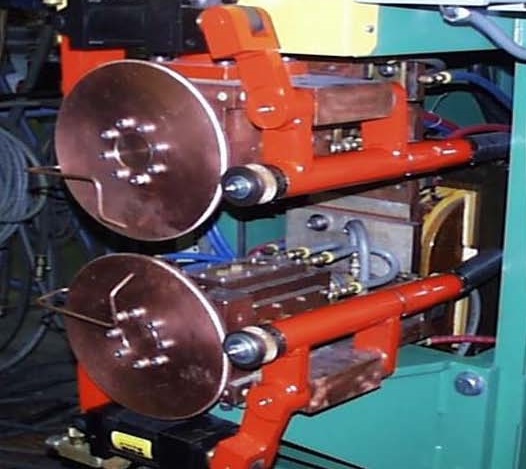 Some copper flakes will be generated and they could be rolled into surface of the weld as the wheel travels. These flakes would be small and do not interfere with the weld integrity but could be visible and not desired in cosmetic locations. Minimizing this knurling might need to be addressed in this situation. Built in secondary operations might be considered inline immediately after welding to smooth the burr or remove the flakes from the knurl drive?