Will sheet thickness, material and coatings have an impact on single firing and double firing resistance welding equipment?

Will sheet thickness, material and coatings have an impact on single firing and double firing resistance welding equipment?

This question can be answered with two types of equipment. A package or fixture type transformer can be manufactured with either one or two secondary outputs.

When two secondarys are used they by transformer design will fire with the same voltage. Thus is the current output will be the same as long as the two current paths are exactly the same. For the welds to be alike the materials being welded and electrodes must be alike and in the same condition. If any of these items vary the current flow will begin to vary between the two paths. If the currents vary too much the welds will start to vary. Generally this is not an issue.

However if one ignored the imbalance it could become a real issue and one weld or the other could become discrepant if material thickness, materials, coatings, cable condition, electrode wear, or water cooling were not maintained properly. Therefor for a fixture transformer material thickness, material and coating are an issue that must be considered in double firing spot welding.

A second type of equipment that could be making single or double welds might be a Cascade welder. This is a control arrangement where multiple guns are being fired on a machine system individually by one control. Each gun has its own schedule but they are sequenced so that they fire in sequence to prevent multiple guns from firing at the same time. In this scenario material thickness and coatings are not a big issue because an individual schedule can be set for each weld to match the circumstances. 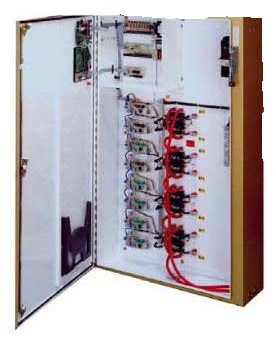 This Cascade Control would be used to fire four individual guns with one control.
In place of this unit, four individual controls could fire the same four weld guns singly. If sequencing were desired the addition of a PLC or other timing function would be needed to control their sequence.

Below is a schematic of an application of a fixture type transformer in use. 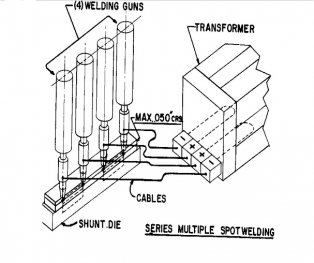