Why do I have surface expulsion?

Why do I have surface expulsion?

Surface expulsion is caused when the part surface heats up. So anything which would cause this, could be a reason. The appearance is similar to interface expulsion. In this case we are looking for conditions which cause the contact surface heat to be high. 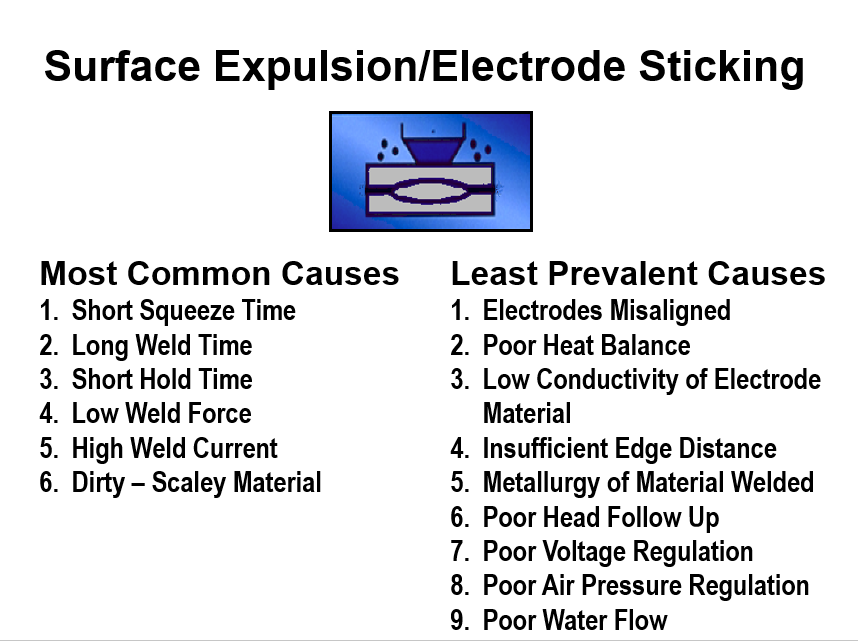 Most Common conditions which can lead to this are:

Long Weld Time – the weld nugget grows too large and reaches the surfaces of the parts.

Low Weld Force – This causes the contact resistance between the electrode and the part to be high and make the surface very hot.

High Weld Current – Too much current and the weld nugget grows too large and reaches the surface.

Dirty/Scaley Material – The dirt and scale can be expelled from the surface.

Short Hold Time – The nugget is still molten when the force is released.

Other issues which could be factors in surface expulsion but not as prevalent as the above are: electrode misalignment, poor heat balance, low conductivity electrodes, insufficient edge distance, metallurgy of the material being welded, poor head follow up, poor voltage regulation, poor air pressure regulation, poor water flow or cooling.